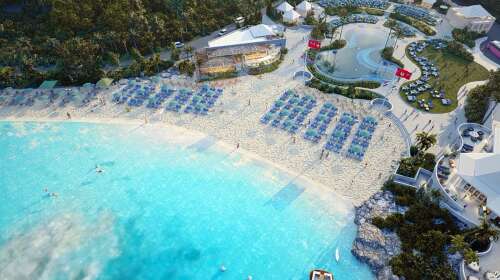 David Burt has ‘cheated’ people over the controversial $376 million overhaul of the Fairmont Southampton resort, the opposition has claimed.

Craig Cannonier, the tourism spokesman for the One Bermuda Alliance, questioned why the Prime Minister remained silent after passing taxpayer-funded guarantees for the renovation through Parliament.

Mr Cannonier said it was ‘alarming’ that people were not informed of the current status of the huge project, which is seen as key to revitalizing the island’s tourist economy after the Covid pandemic.

Mr Burt told MPs in February that a deal with developers Gencom was imminent, before then-Finance Secretary Curtis Dickinson quit his job days before the budget to protest the generous terms offered to the company.

The deal, extending tax breaks and giving taxpayer guarantees for the project, was approved by parliament before it was suspended for the summer recess in July, but no details of a final deal with Gencom has not yet been announced.

Mr. Cannonier says the negotiations have become “problematic”, but the government is not telling taxpayers what is happening.

Mr. Canonier said The Royal Gazettee: “Our Prime Minister has kept an alarming silence on the status of this most important project.

“We have heard time and time again how important it is for our tourism industry, local entrepreneurs and our taxi business that we need to act quickly.

“It’s been several months now since our Prime Minister said ‘in two weeks an update will be available’. Again, he has misled the people of Bermuda.

“Our Prime Minister has been as transparent as mud. It is obvious that this government has challenges and that the negotiations are problematic.

“I have said before and directly to Gencom that there is no need to extend the concessions beyond the ten years already provided for by law.

“I wonder now how much more can one ask for beyond the 15 years granted?

“At the moment only the tree frogs from Bermuda to Southampton are talking.”

Mr Dickinson quit Cabinet days before he was due to deliver the February 25 budget after a rift with the Prime Minister over plans to give generous guarantees to Gencom.

The Prime Minister took over the finance file and got Parliament to adopt tax concessions to developers of hotel complexes in the amount of between 121 and 133 million dollars over 15 years.

The move, which was heavily attacked by Mr Dickinson, also included the government giving a guarantee of $75 million, representing 21% of the project’s revised costs of $376 million.

Mr Dickinson said the legislation had failed to provide enough detail when, with the $75m guarantee, it could be as high as $180m.

The former finance minister said the cost could be even higher, with the potential for further additional costs on the project.

Mr Dickinson said there was a risk other developers such as St Regis could approach the government for retroactive relief because of the Fairmont deal, and said the government was ‘flying blind’ on actual costs.

He said: “Given the government’s budgetary situation, the proposed legislation is too generous.”

In an unusual but not unprecedented move, the House of Assembly is expected to return in mid-September amid speculation that there could be further moves on the Gencom deal.

The government did not respond to requests for The Royal Gazette regarding the current status of the agreement with Gencom, or whether a financial agreement with the developers has been reached.