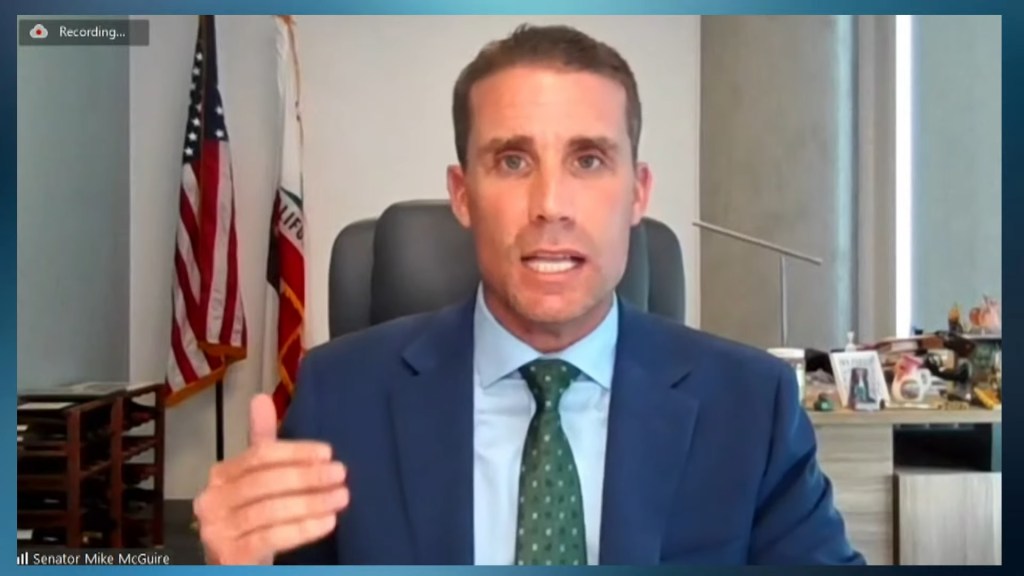 “We’re going to help lift homeless people out of poverty by giving them a career at Caltrans,” McGuire said. “Over the next 36 months, the state will hire 10,000 former homeless residents and former incarcerated residents.”

McGuire was joined by Geoffrey Ross, deputy director of the state Department of Housing and Community Development, and Victor Duron, grants director for the California Interagency Council on Homelessness, to delve into the details of the state’s plan, which is to take a housing-first approach.

This means California is aiming to build 50,000 permanent, supportive housing units for people who are homeless and mentally ill in the coming years. Permanent supportive housing provides people with shelter as well as voluntary on-site mental health and addictions services.

It’s difficult and expensive for developers to build new housing for a variety of reasons, McGuire said, so the state offers money to buy and renovate buildings like offices and hotels, which is easier. .

Duron said the funds available to counties are flexible, so they don’t necessarily need to retrofit a building; they could, for example, start offering services in a shelter that already exists.

Smaller, rural counties are often more resource-strapped and may not have a dedicated grants writer or ongoing development project, Ross said.

Cities, tribes and agencies in Humboldt County have already started claiming a portion of those funds to create permanent supportive housing. Most recently, Arcata received nearly $18.8 million to convert the 79-unit Red Roof Inn into housing and provide five years of support services.

The county’s point-in-time count, which offers a snapshot of how many people are homeless on a given night, was taken Jan. 26, but those numbers won’t be available until later this spring. However, County Health and Human Services Department Director Connie Beck provided county supervisors with relevant data on Monday.

The county has connected to 580 homeless people through street outreach, Beck said. At the point count, she said 350 people were in emergency shelters.

“We’ve made progress over the past few months here on the North Shore,” McGuire said, “but it’s just not enough and we need to do more.”

McGuire added that the bulk of those newly homeless are women with children and women over 65.