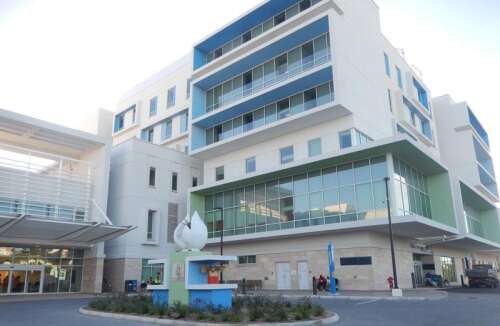 The work is expected to provide efficiencies that will reduce costs.

A BHB spokeswoman said the laundry and laundry service had been housed in the basement of the general wing at King Edward VII Memorial Hospital since the facility was built in the 1960s.

Preston Swan, Acting Chief Operating Officer of BHB, explained: “Renovation of this area is necessary as the infrastructure is almost 60 years old and failing.

“This department handles all laundry for our two hospitals, KEMH and the Mid-Atlantic Wellness Institute.

The old facility closed earlier this month so the upgrade – which has a December completion date – could be carried out.

A staff member folds laundry in a transition area set up while the Bermuda Hospitals Board works on a $6.6million renovation of its aging laundry (pictured)

Jerome Swainson, Director of Hotel Services at BHB, added: “We have experienced complete equipment failures on several occasions over the past year, putting the organization at risk to be able to deliver on our mandate.

“The new modern equipment will improve the efficiency of wash cycles, the use of water and chemicals, as well as a reduction in energy consumption.

“Additional savings will be realized through reduced overtime, overtime and outsourcing due to frequent equipment downtime over the years.”

The 33 employees of the laundry service will remain employed during the renovation.

The spokeswoman said: “Most staff are carrying out their usual tasks, such as sorting, folding and distributing, from a temporary workstation created in another area of ​​the basement.

“A few laundry operators have been redeployed to one of the outside contractors, who have been retained to wash BHB’s laundry while the renovations are underway.”

She added that the general contractor for the project was Greymane Construction.