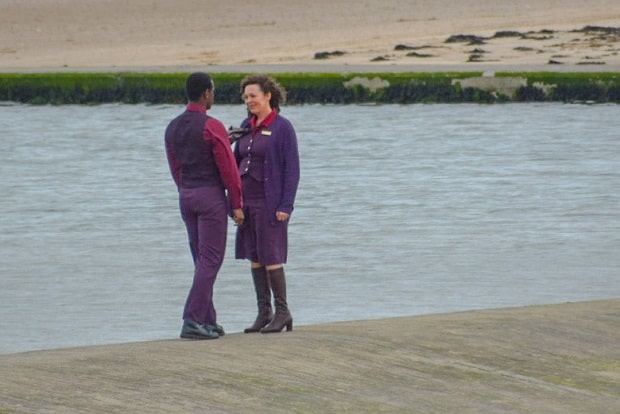 Filming of the Sam Mendes movie in Margate is coming to an end – meaning traffic controls are now only in place on Friday May 20 between 7pm and midnight on Marine Terrace, according to Thanet council.

Empire of Light began prepping and then filming in the city at the end of February and the crew are expected to stay in town until May 26 for additional filming, although it is understood there will be no more store closures. roads.

The Dreamland neon sign on the Grade II* listed cinema fin has been replaced with Empire Cinema signs and the 20,000ft set at ‘Godden’s Gap’ contains a replica of the old Dreamland cinema, including including the staircase and the chandeliers, with a ticket office outside.

The production included fireworks, a Chariots of Fire movie “premiere”, vintage cars and fake snow and rain as well as a mass stage with mods and skinheads.

The director, Mr Mendes, is known for works such as the James Bond films Skyfall and Specter and the 1917 war film as well as numerous West End stage performances.

He wrote Empire of Light, making it his first original solo screenplay. Also implicated is cinematographer Roger Deakins, who won best cinematography at the Academy Awards for his work on 1917.

The film is produced by Oscar nominee Pippa Harris (1917, Call The Midwife, Penny Dreadful) and Mendes (1917, Skyfall and American Beauty) under their Neal Street Productions.

It will be published by Searchlight Pictures.

During the cast and crew’s stay in Margate, photographers on the island captured scenes throughout filming.

The production company has also gifted Thanet Council with the string lights hung along the seafront and up to the Old Town, although details of their operation and maintenance have yet to be worked out.

The filming also had a positive impact on the island, despite the inconveniences of the road closure, with hundreds of people and local businesses involved to support the production and, at a normally quiet time of year to the hospitality industry, restaurants and accommodations run by crew and molding. A large, undisclosed payment was also made to Thanet council for using the area for filming.

Productions on the island are wide ranging and include photo shoots for magazines, music videos for a range of musicians, television dramas, comedy programs, short films and feature films.

These have included films Lady in the Van with Dame Maggie Smith and King of Thieves with Sir Michael Caine as well as TV series Eastenders, Top Boy, The Tunnel, The Larkins and Killing Eve.

A Lumière production spokesperson previously said: “Bringing a film to a region has a direct and indirect economic benefit for the local economy. During production, immediate direct economic benefits include crew staying in local accommodation, dining out at local establishments, hiring local labor, sourcing fresh local produce, l use of local equipment, vehicles, trades and materials, all to create the necessary temporary sets.

“Indirect benefit is often discreet and overlooked, but the British Film Commission has data showing that indirect effects often take the form of tourism. Attractions, hotels and restaurants see higher revenue and employment due to tourist visits, driven by the desire to visit filming locations or sets once a film has been released to the general public. Not just in the UK, but potentially worldwide.

“Our primary goal is not just to make a successful shoot, but also to leave a positive ‘tourist’ legacy for the city for years to come.”