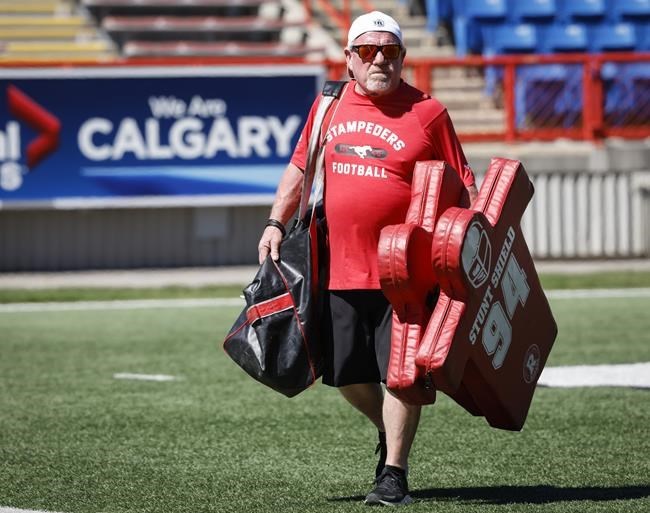 Players and coaches can win championships, but Dave Dickenson believes it’s people like George Hopkins that hold a football team together. Hopkins is the veteran equipment manager of the Calgary Stampeders in his 51st year with the CFL club.

Players and coaches can win championships, but Dave Dickenson believes it’s people like George Hopkins that hold a football team together.

Hopkins is the veteran equipment manager of the Calgary Stampeders in his 51st year with the CFL club. He will play his 1,000th career regular season game on Friday when the Stamps visit the Ottawa Redblacks.

Hopkins has been part of six of Calgary’s eight Gray Cup wins. In 2014, he was added to the club’s Wall of Fame as a builder.

“For me, there are positions that hold an organization together,” Stampeders head coach Dickenson said. “You have your equipment manager, your head athletic therapist and your video coordinator and those three positions make everyone in the organization click.”

The Stampeders have certainly been blessed in all three positions.

Calgary director of video operations Ross Folan is in his 30th season with the club. Pat Clayton retired as the club’s director of medical services in 2013 after 29 years.

“Everywhere I’ve been, the gear guys kind of run the show. The guys respect them and they know they need to have the gear guy on their side,” Dickenson said.

Dickenson also has a long history with the Stampeders. He was a quarterback for five seasons (1997-2000, 2008) before starting his coaching career with the club as an assistant in 2009. He became head coach in 2016.

“I came to the league in the mid-90s and obviously Geo had been around for more than a while,” Dickenson said. “When I heard 1,000, I really didn’t believe it.

“It’s just crazy to think he started at 12. Aren’t there child labor laws against that?”

Hopkins, a 63-year-old Calgary native, began his tenure with the Stampeders as a ball boy. But even he admits that he has lost track of time.

“It kind of got away from me,” Hopkins said with a laugh. “I think more than anything is loving what you do.”

Hopkins took over as equipment manager shortly after the retirement of the late George (Dundee) Dunn in 1977.

Hopkins has witnessed first-hand the evolution of football gear from being big and bulky and one-size-fits-all to being lighter and more athlete-specific.

“Everything felt bigger, heavier and smelled really bad after the first week you wore it,” Hopkins said. “Fast forward to where we are now, I mean, hockey shoulder pads are bigger than football shoulder pads for some guys.”

Hopkins is generous with his time, providing advice and equipment knowledge to Alberta high schools and minor programs.

“For us, he’s been a real godsend,” Football Alberta general manager Tim Enger said. “He is actively involved in making sure our children are given safe equipment and the people handling the equipment are decently trained to know what they are doing.”

Hopkins has missed just three regular-season competitions during his tenure and none since 2012, when surgery for a torn rotator cuff forced him to skip a two-game road trip in the East. .

The other came in 1992 when Hopkins’ wife Cathy gave birth to their first child, daughter Jorde. The Hopkins also have a son, Hunter, and a grandson, Malcolm.

Again, continuity has long been a staple of the Stampeders organization.

“I like to think I made a few guys in the locker room aware of what the Stampeder method is.”

A fact that has not escaped the notice of quarterback Bo Levi Mitchell, a Stampeder since 2012 and in his eighth season as a starter.

“If you go into the coach’s office, we have team photos from years ago and you can see the progress of Dave and Huf,” Mitchell said. “But in every one of those pictures there’s George and it’s pretty cool to see his progression.

“He’s one of those guys who’s consistent, he doesn’t change who he is… he’s Geo Hopkins no matter what and that’s one of the things I love about him.”

Mitchell said Hopkins certainly has the respect of Stampeders players.

“If he says, ‘Hey, this is a shirt, you can do whatever you want with it, but this shirt here, you don’t cut it, you don’t take it home. It stays in your locker at all times. Guys respect that,” Mitchell said. “Guys understand that Geo has his ways and if you go against that, it’s not like there’s any really bad consequences, but there’s consequences.”

A constant with Hopkins is his penchant for wearing shorts, whatever the weather.

“I’ve never been a fan of pants,” Hopkins said. “It’s not so bad in the winter because you leave the house and get into your car in the garage and then drive to work… You could be outside for 38 seconds to get into the building.”

Hopkins thinks seeing him wear shorts in late fall/early winter might inspire players to do the same.

“I think so, especially with your young guys who’ve never really seen snow,” he said. “I always tell guys when they come for long underwear, ‘I’ll give you long underwear when you see me wearing pants.’ This is my September response.

“Now when it’s cold, of course, we have amazing cold weather gear that we give them. But that toughens them up a bit because if that little bastard over there is going to walk around in shorts, then maybe ‘it’s not that cold outside.

Mitchell said Hopkins knows very well when to do business, but also when a little levity is needed.

“When I have maybe a few bad car rides, it’s the guy who comes and says, ‘Here, drink this water. I changed it for you because you need different water,” Mitchell says. “It kind of distracts you in a good way. He conjures up something completely random that has nothing to do with it, but knows you might need a little nudge or something.

“I know he’s small (in size) but I’d say Geo is a giant in terms of presence and personality… This guy loves this game, he’s dedicated his whole life to it and it touches us for sure .”

And in 1978, the Stampeders certainly benefited from Hopkins’ generosity during a road trip to Montreal. Two days before the game, Hopkins was at Olympic Stadium waiting for the equipment truck to arrive.

The problem is that in the back of this truck was a load of 400 pounds of fresh lobster.

“I have no idea where my gear is, it takes me a day and a half to find it, it’s actually in Newfoundland,” Hopkins said. “So we did the one thing we thought we had to do.

“We redirected the truck to the team hotel and ate some fresh lobster that night and I crossed my fingers we were going to see the gear in time for game day. It turned out presented at 2 p.m. on game day, so he was one of the quickest setups we’ve ever had, but we ate really well with Air Canada.”

Hopkins said he has no plans to slow down anytime soon.

“Fortunately, I’ve been in pretty good health over the years,” he said. “I kind of thought that the day I hit the 50 season mark, I’d like to do 55.

“That’s kind of the plan, that I want to make 55 and then walk off gracefully and maybe hang around a bit and be on the sidelines watching a game, not working it. That’s kind of what I’m looking at. “

With files from Donna Spencer in Calgary

This report from The Canadian Press was first published on August 4, 2022.