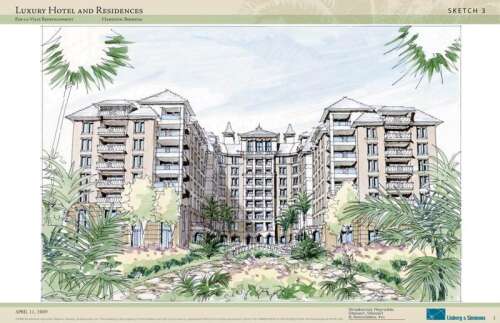 $18m hotel loan dispute back in court – The Royal Gazette

Hotel vision: 2009 artist’s impression of the proposed St Regis complex for the By the City car park in Hamilton (file photo)

A law firm yesterday asked a court to waive legal privilege in a dispute over an $18 million loan for a hotel development that was never repaid.

The move came after Mexico Infrastructure Finance, which provided the money to revive development of the Par la Ville hotel in a parking lot in Hamilton, accused law firm Terra Law of negligence over a legal opinion that the Corporation of Hamilton could guarantee the loan. .

But Terra Law asked the Supreme Court to lift the legal privilege on the grounds that the MIF could have taken legal advice from other sources such as Conyers, their law firm on the island.

The law firm also argued that the MIF had received a series of draft opinions from Terra Law, so it did not have to rely on the firm’s final opinion.

A draft notice from Terra Law, sent in June 2013, stated that there was a possibility of legal challenge “on the ground that the law does not give the Company express power to mortgage its land to support the loan a third” .

The legal dispute relates to the $18 million loan made by MIF, a Florida-based company, to Par-la-Ville Hotel and Residences, also known as PLV, in 2014.

The loan was guaranteed by the Corporation of Hamilton, but PLV defaulted on the loan in December of that year.

The Company initially said it would honor the warranty, but then argued in court that it had no authority to give it, so it was unenforceable.

The legal dispute went to the Privy Council in London, Bermuda’s final court of appeal, which ruled in favor of the company.

The MIF has launched a series of legal actions to recover the lost money, including $12.5 million given to Gibraltar-based investment firm Argyle in a bid to raise more funds.

The source said the rest of the $18 million was spent on development services, ranging from architects to lawyers.

A London High Court judge ruled in July 2017 that Robert McKellar, the manager of Argyle, engaged in “unjust enrichment” and spent the money.

Argyle was liquidated in 2019 to recover money Mr McKellar spent on an expensive Aston Martin sports car, an engagement ring and two properties in the English county of Sussex, Overton Grange and Rystwood Farm.

The Supreme Court heard that some of the missing money had been recovered, but the costs had nearly “wiped out” any benefit.